The statutory mission of the GNCHR consists of, inter alia, the enhancement of the awareness for human rights within the educational system (article 1, par. 6c of Law 2667/1998). The GNCHR recalls that human rights education is in itself a fundamental human right, which is enshrined in:

From the aforementioned points derives the obligation of both the NIHR and the public or private bodies which are working in the field of human rights to develop specific educational programs and activities that focus on the promotion of human rights. For all these reasons, besides, human rights education has been included in the hardcore of the GNCHR mission.

More specifically, recognizing that the cornerstone of human rights education is to introduce and integrate international human rights standards and practices into people's daily lives, the GNCHR has been developing the following actions in recent years:

The training seminars are conducted on an annual basis and cover a wide range of critical issues related to human rights. They are cost-free and are addressed to the general public (undergraduate or postgraduate students of all Faculties of Various Sciences, as well as professional lawyers, judges, teachers, social workers, employees, etc.). 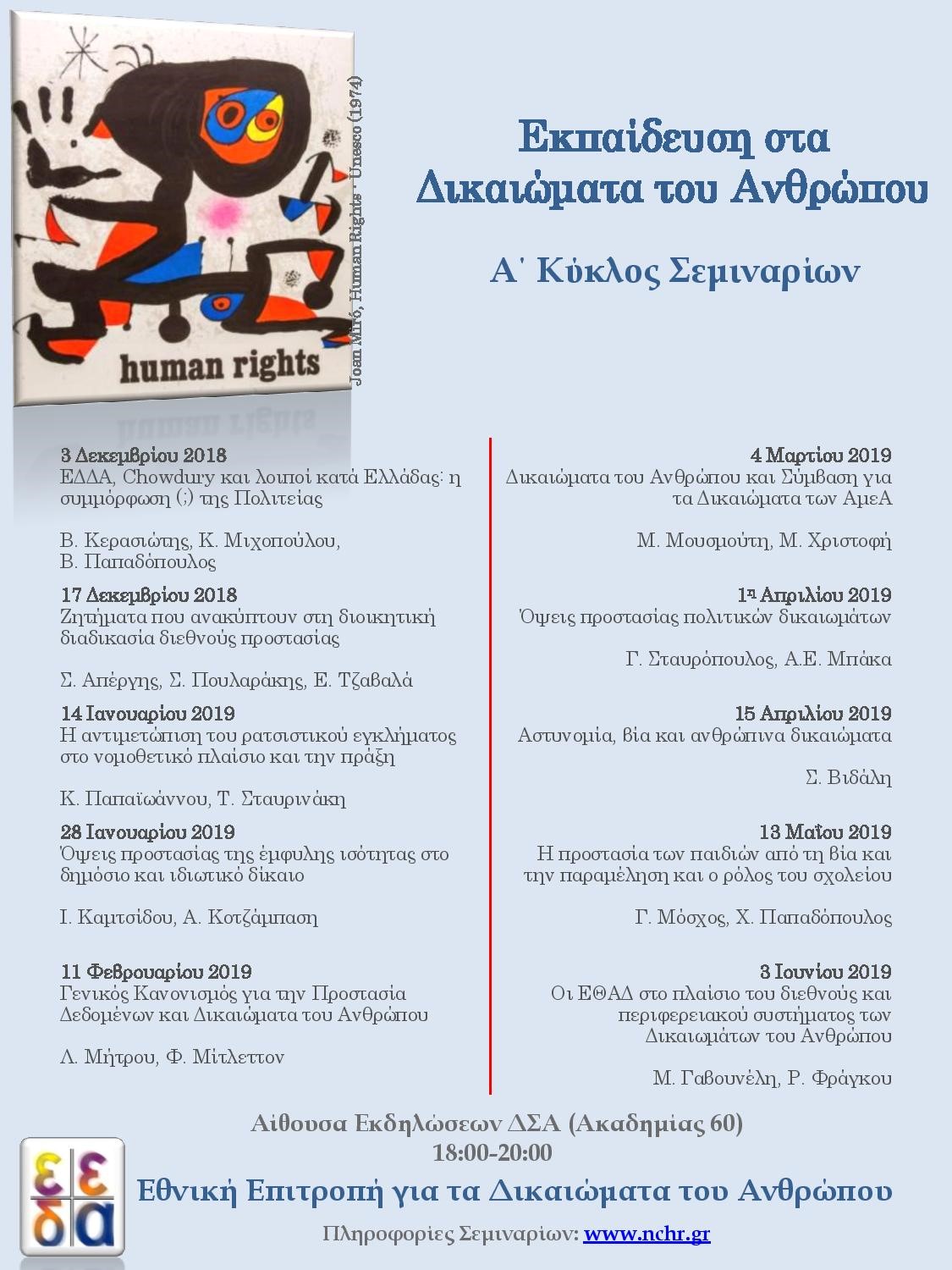 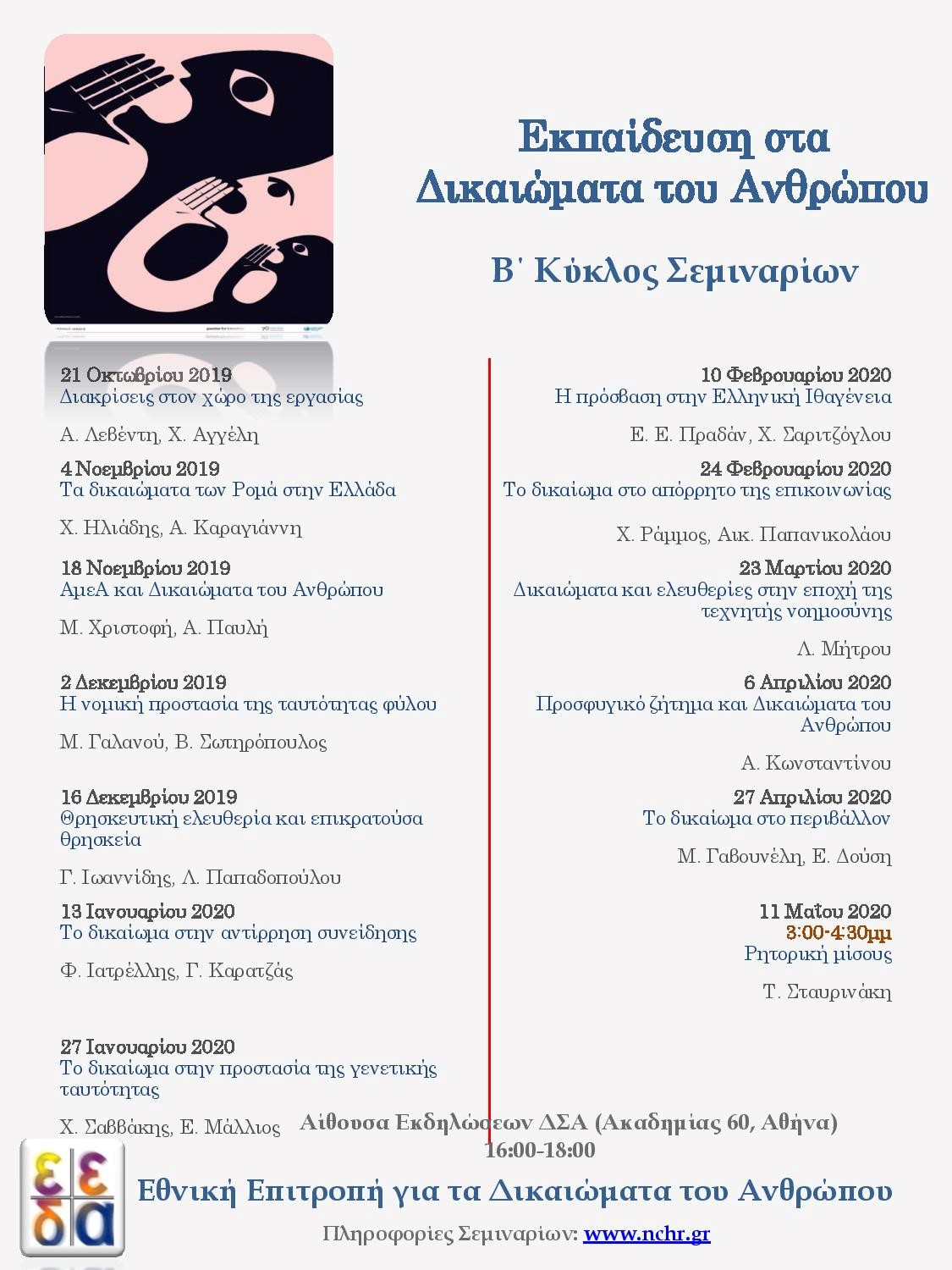 The GNCHR carries out high-level training courses adapted to the special needs of each professional field. In this context, the GNCHR has established Seminars for Prosecutors and participates systematically in training activities for lawyers.

In particular, the GNCHR conducted a Seminar Season on the protection of human rights for Prosecutors in its premises from March to May 2019. More specifically, the main issues which were presented consisted of the treatment of racist crime, the freedom of information and its relationship with the presumption of innocence, the police violence, the General Data Protection Regulation and the National Human Rights Institutions (NHRIs) within the international and regional system.

The GNCHR co-organized in cooperation with JUSTROM (a program of the Council of Europe and the European Commission for the access of women Roma to justice) two-day training seminars for lawyers in Athens, Thessaloniki and Xanthi, during the period of February - March 2019 with the title "Fight discrimination and access to justice for Roma women". The program included theoretical and practical training aimed at both the informing and raising awareness of lawyers on issues of rights, combat racism and access to justice for Roma women, cooperation with national entities for human rights and the provision of tools regarding the processing of cases concerning Roma, based on JUSTROM's experience.

In particular, the GNCHR visited the Experimental High School of Intercultural Education of Acharnes and participated in the training of its students in human rights. The training at hand took place on Tuesday, May 15, 2018, responding to the request of the school teachers.

The President of the GNCHR Prof. Maria Gavouneli carried out a presentation on Wednesday, October 2, 2019, to the students of 15th Elementary School of Athens on human rights, giving special emphasis on the rights of the child. Namely, issues related to the rights to life and communication with parents, freedom of expression, education, as well as issues related to refugee minors, non-discrimination, economic exploitation, and children with disabilities were raised and developed in a child-friendly way.

Cooperation with higher education institutions of the country.

The GNCHR, fulfilling its legal mission to promote research on issues related to human rights issues, has signed Cooperation Protocols with ten universities and departments, so that it can consolidate and strengthen their cooperation in both research and education fields. These acts consist of a very important step for the formal cooperation between the Greek higher education institutions of the country and the GNCHR in order to fulfill its mission, in the light of its contribution in the research and documentation of recommendations, proposals, studies, reports or and opinions regarding the human rights field which prepares and submits to the State. It is also being promoted the opportunity of students for practice in the human rights field at the GNCHR with the assignment of specialized tasks.

During the years 2018-2020, bilateral Cooperation Protocols were signed with (in chronological order):

The GNCHR, in the context of its responsibilities for the promotion and education in the field of human rights, consistently responds to proposals for presentations at conferences, seminars and courses addressed to university students concerning the protection of human rights. In particular, the GNCHR has recently developed the following actions: